Skip to content
by Glen Depke, Traditional Naturopath In the perfect world, everyone that had challenges with fatigue would test their adrenal function and thyroid function and myself and/or my associate Lynda Buitrago would be working with you to specifically address your challenges and put you on the proper protocol to assist your body in  regaining your optimal energy. We are realistic though and recognize that we will not have the opportunity to work with all of our followers, so I wanted to take the time to put together an informative article to address the common underlying causes of fatigue while providing to answers for you to address this personally. Isn’t it time to get rid of FATIGUE once and for all?! FDA: Caffeine Powder and Energy Drinks May Cause Fatal Health Risks In late August, the U.S. Food and Drug Administration issued warning letters to five different makers of caffeine powder to put on record that that the product can cause serious and fatal health risks to consumers. This comes more than a year after two young men died after taking pure powdered caffeine to get an energy boost. One teaspoon of the pure powdered caffeine is approximately equal to 28 cups of coffee (Source: Newsweek. “FDA Issues Warning Letters to Makers of Caffeine Powder.” September 3, 2015). In 2012, the FDA started investigating the five deaths linked to Monster energy drinks (Source: WebMD. “FDA: 5 Death Reports for Monster Energy Drink.” October 23, 2012). Lawsuits are currently underway claiming that consumers, especially adolescents, are not warned of the risk for heart problems. Furthermore, these energy drinks contain other stimulants besides caffeine that are not listed on the label. Pregnant women, especially, should be wary of drinking coffee. The World Health Organization currently recommends that pregnant women drink no more than 300 mg of caffeine daily. That’s approximately 2 cups of medium strength coffee. But even at this amount, it can definitely hurt the fetus. Studies show that caffeine can cause restricted fetal growth and low birth weight (Sources: BMC Medicine. 2014;12:174; British Medical Journal. 2010;340:c2331). For every 100mg of caffeine consumed, the birth weight went down by about 1 ounce. Small babies are at risk for developmental problems. So think first before you reach for that cup of coffee to give you an energy boost.

Fatigue: Caffeine is not the answer   We all have different ways of combating fatigue. Caffeine, whether pure or in energy drinks, only provide a temporary boost and may come with fatal risks. There are different types of fatigue and there really is no one-size-fits-all solution. What is important is finding out the underlying cause in order to address it. Once the problem is out of the way, energy will naturally increase and be sustained. 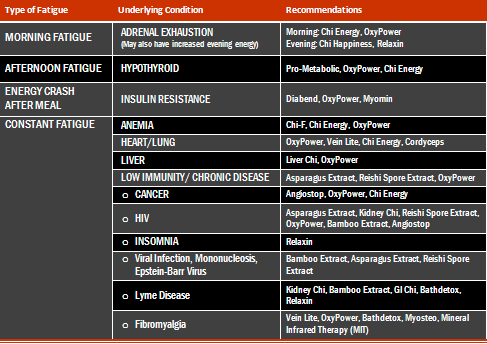 MORNING FATIGUE (Adrenal Fatigue) Protocol: Chi Energy and OxyPower in the morning. Take Chi Happiness, Relaxin in the evening if nighttime cortisol is high The adrenal glands produce hormones such as cortisol, aldosterone and adrenaline, etc., that help the body regulate metabolism, respond to stress or control blood pressure. When the adrenals are compromised by constant stress or chronic disease, for example, it can cause adrenal fatigue. Cortisol is typically low in the morning in adrenal fatigue. In serious cases, adrenal function is so low that getting out of bed becomes difficult. In other cases, a tumor in the adrenal gland or pituitary gland (which affects adrenal function) can affect energy and cortisol levels. To help correct adrenal fatigue, Chi Energy and OxyPower are recommended. CHI ENERGY (Increases Cortisol, Adrenal Function) 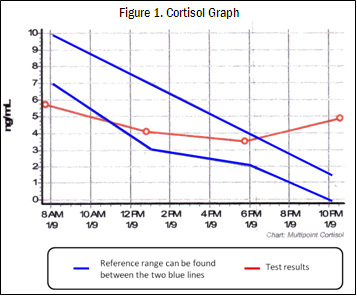 Take Chi Energy in the morning and afternoon to improve cortisol levels and adrenal function. Typically, cortisol should have a downward trend towards the end of the day (blue lines in Figure 1). But in those with adrenal fatigue, cortisol can fluctuate throughout the day. Chi Energy contains Panax ginseng, which works as an adaptogen. It enables the adrenal glands to regulate cortisol level production as needed. In addition, Chi Energy blocks the enzyme 11-beta-Hydroxysteroid dehydrogenase so that the conversion of cortisol to cortisone is stopped, increasing cortisol levels (Figure 2). 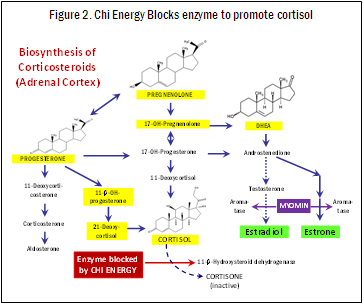 OxyPower (Increases Energy) OxyPower can quickly increase energy in a little as 30 minutes. It works by improving mitochondrial efficiency so oxygen and glucose are properly utilized by the cells and converted to energy. This results in more long-lasting energy. It is best taken in the morning and afternoon. Chi Happiness and Relaxin for Elevated Nighttime Cortisol in Adrenal Fatigue and Insomnia In some cases of adrenal fatigue, cortisol may either be constantly elevated throughout the day as a result of chronic stress or it may increase at night, causing sleep problems. If cortisol is high, Chi Happiness and Relaxin can be taken in the evening to reduce cortisol and promote sleep. Myomin for Estrogen Dominance in Adrenal Fatigue Adrenal fatigue is also closely tied to estrogen dominance, especially in women. According to Bruce Rind, MD, adrenal fatigue and estrogen dominance usually occurs hand in hand and need to be treated together. Increased need for cortisol causes progesterone depletion, leading to estrogen dominance. Myomin is recommended for lowering estradiol. AFTERNOON FATIGUE (Hypothyroidism) Protocol: Pro-Metaboolic, OxyPower, Chi Energy If you experience afternoon fatigue, it is most likely due to low thyroid function (hypothyroidism). People with hypothyroidism usually have at least 3 of the following symptoms: fatigue, unexplained weight gain, cold hands and feet (not due to poor circulation), occasional depression, hair loss, dry skin, and memory loss, then you definitely have hypothyroidism. To correct hypothyroidism, take Pro-Metabolic. Pro-Metabolic for Hypothyroidism Pro-Metabolic lowers thyroid stimulating hormone (TSH) for promoting thyroid hormones and metabolic rate. A. Barber, DC from AK, has a 42 y/o/f patient with hypothyroidism. Her TSH was 0.90 and after 9 months her TSH increased to 3.82, which is normal. B.G. from NY: “I have only been on the Pro‐Metabolic for 3 weeks, but I have lost 2 pounds a week with no change in diet or exercise, and I have more energy and have been warmer (I used to have cold hands and feet most of the time)…I also find it easier to get my heavy housework done and am more motivated to do things and go out more.” ENERGY CRASH AFTER MEALS (Insulin Resistance) Protocol: Diabend, OxyPower, Myomin CASE 1: Morning Fatigue, Adrenal Exhaustion, Energy Crash after Meal, Hypoglycemia R.S. 67 y/o/m from California, relates that he has a very difficult time getting up in the morning. It often takes him half an hour after he wakes up before he can actually get up and about. He also experiences an energy crash after every meal. He is now taking Chi Energy, OxyPower, Diabend and Myomin. An energy crash after a meal often indicates insulin resistance. In the case above, R.S. does have insulin resistance and also has severe hypoglycemia (a precursor to diabetes and insulin resistance). Check your HbA1c level to test for insulin resistance and diabetes. If your HbA1c is over 5.6, you are most likely insulin resistant. For this, Diabend, OxyPower and Myomin are recommended. If you have any comments or questions regarding this article, please post below and we will address this personally.