Skip to content
Ebola. Enterovirus D68.You’ve heard about them in the news or in social media. The whole world is talking and worried about the spread of Ebola. In the United States, the outbreak of enterovirus D68 (EV-D68) is becoming a concern, with several cases confirmed in 46 states. To add to that, the flu season is also looming, with activity expected to start later this month.
The question is, how do we protect ourselves from these viral infections? Besides minimizing contact with someone you may think has a viral infection or washing hands after being out in the public, taking Bamboo Extract can help. My wife and I are currently traveling with multiple airplane trips and we took a dose of Bamboo Extract both pre and post flight. This is not only a precaution for a possible Ebola contamination but any potentially airborne type of pathogen.
For any type of upper respiratory infections, Bamboo Extract is an excellent supplement. It works quickly for chronic and acute respiratory infections, especially in children, young adults and the elderly. Whether you have the flu, a cold or cough, take Bamboo Extract immediately at the first sign or symptom to quickly assist your body in fighting infection. Or better yet, take Bamboo Extract before the flu season starts or if you work in high-risk environments, such as hospitals, doctors’ offices, schools, etc. 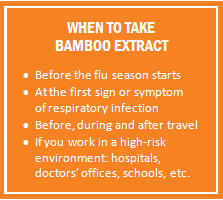 Bamboo Extract has inhibitory effect against viruses and bacteria such as Streptococcus pneumoniae, Staphylococcus aureus and more. One of its active components is guaiacul, an important ingredient also found in Tamiflu, a conventional flu medicine. Bamboo Extract is also a rich source of nutrients, including over ten amino acids, such as glucose, fructose, sucrose, guaiacol, cresol, phenol, formic acid, acetic acid, benzoic acid and salicylic acid. In various studies, Bamboo Extract was found to assist the body following actions:
In the current EV-D68 outbreak across the nation, mostly children are affected, especially children with existing respiratory conditions. Studies show that Bamboo Extract is an excellent supplement for respiratory conditions in children.
One such study evaluated the effect of Bamboo, either in granule or liquid form, on several respiratory conditions in children. A total of 148 children with various infections (colds, tonsil pharyngitis, laryngitis, and herpangina) were enrolled in the study. Bamboo granules were given to 76 children while Bamboo juice was given to 72 children for 7 days. Effectiveness of Bamboo was evaluated according to the elimination of symptoms and infections by 60% to 90%. Expectoration is vital to improving infection of the upper respiratory tract; therefore, the expectorant action of Bamboo was also evaluated. Results show that Bamboo Extract in either form is effective in eliminating phlegm and improving respiratory infection within 7 days. The following cases illustrate how quickly  and effectively Bamboo Extract works. Bamboo Extract is not only effective for children but for adults as well. Try Bamboo Extract now!   Take Bamboo Extract to Protect Yourself Especially when you Travel The many constituents in bamboo extract are considered to be the main reason for its respiratory benefits. It contains over 10 amino acids, which help break the disulfide bonds in sticky components of bronchial secretion. This reduces the density of phlegm, diluting it in the airway and making it easier to cough out the phlegm. Its anti-inflammatory action also contributes to the relief of respiratory symptoms. Furthermore, one of Bamboo Extract’s chemical constituents which is similar to guaiacul, the main ingredient of Tamiflu, also contributes to its effectiveness. In fact, during the H1N1 flu outbreak in Asia years ago, Bamboo Extract became a very popular supplement to help combat the symptoms. An in vitro test has demonstrated Bamboo Extract’s potent antibacterial effect, inhibiting 8 different kinds of bacteria, including ones that are associated with respiratory diseases such as pneumonia (Klebsiella pneumoniae, Streptococcus, and Pseudomonas aeruginosa) and the flu (Bacillus influenza). So now with the enterovirus-D68 going around, with the fear of an Ebola outbreak here in the United States and the upcoming flu season, there is no better time to start taking Bamboo Extract. For even better results, it can be taken with OxyPower, Reishi Spore Extract and Asparagus Extract. This combination is also excellent to take for Epstein-Barr virus. When travelling by plane, take Bamboo Extract and OxyPower. To order any of these Chi Enterprise products, visit this link. …or try Bamboo Extract now!