Skip to content
Reproduced with permission from Dr. Tsu-Tsair Chi. Thank you Dr Chi for sharing your invaluable information! Based on generations of Traditional Chinese Medicine, it is well know that the body will provide multiple signs to suggest potential challenges that are likely to arise. Using these life saving tools, you can potentially learn about deeper bodily imbalances and use this information to follow a preventive program to assist your body in finding it’s ultimate state of balance. It is much easier to address these challenges earlier in the game rather than waiting until you have been conventionally diagnosed and left with little if any answers. Today we’ll look at cherry angiomas and the potential signs exposed for you.
Alzheimer’s Disease and Cardiovascular Problems can Manifest Physically
There are many risk factors of Alzheimer’s Disease, such as heart problems and heavy metal toxicity. And you will see in the following cases, these are manifested in our tongue, nail and other parts. For example an 80-year-old female from Florida, has an ear crease (sign of heart problem) and dark, protruding veins under the tongue (heavy metal toxicity) (Figures 1 and 2). She does have hypertension, heavy metal toxicity and now has severe memory loss. Anyone who has these markers have a high risk for open heart surgery.

In another case with a 74-year-old male patient with Alzheimer’s Disease, he has had 3 bypasses and has brain atrophy and balance issues when walking. He presents with a red lunula on the thumb, a sign of heart disease (Figure 3).

Having these markers should already alert you to at least a risk for heart problems. Heavy metal toxicity, too, can lead to heart problems. Both of these affect the brain and cognitive function. In F.F.’s case, hypertension and heavy metal toxicity eventually affected her memory. The other one had heart problems (3 bypass surgeries) that also affected his brain and he developed Alzheimer’s disease. In addition, if you have ear ringing but have no hypertension or sinus problems, this may signal hardening of the arteries (atherosclerosis) especially near the brain. Short-term memory loss, balance issues (easily falls down), no sense of direction or time and the lack of desire to read because of confusion are some of the other signals that point towards Alzheimer’s risk. Alzheimer’s Disease: The Most Feared Disease in 2015 In 2006, the #1 consumer health concern was heart disease. In 2010, Alzheimer’s disease became the second most feared disease in the United States next to cancer. Now in 2015, most people worry about Alzheimer’s than other diseases for a number of reasons. First, there are many effective treatments available for cancer and heart disease but not for Alzheimer’s disease. Second, this disease can last 8-10 years, such a long period to consider especially with the debilitating symptoms associated with it. Most importantly, we are living longer than before, with many people living to 90 or beyond. By 80 years old, about 1/3 already have Alzheimer’s symptoms: memory loss, lack of the sense of direction and time, language impediments, confusion, and so on. Would you want to live a life like that? Eventually, as the symptoms get worse, it would become impossible for you to take care of yourself. Because of memory loss, you forget to take your medications or where to go or what time it is. This makes you a “walking vegetable,” totally dependent on others. The loss of dignity experienced by someone with Alzheimer’s and the burden imposed on family members make this disease feared by most people. So if you do not want to experience the suffering caused by Alzheimer’s, you need to prevent and address one of its main factors: heart disease. PROTOCOL FOR REDUCING ALZHEIMER’S DISEASE RISK AND IMPROVING COGNITIVE FUNCTION
As mentioned above, heart disease and heavy metal toxicity increases the risk for Alzheimer’s disease (AD). Studies have shown that cerebral strokes cause brain ischemic injury and damage to the hippocampus, making it harder to remember things and recognize words and people, which are some of the hallmarks of AD.Brain ischemia may be the initial trigger that causes loss of neurons (brain cells) and amyloid deposits (plaques). Ischemia results when there is not enough blood flow and oxygen to the brain, perhaps from a blood clot or from cardiac arrest. About 80% of stroke cases are caused by a blockage (ischemia). Inflammation is also a big factor that restricts blood flow and leads to atherosclerosis. If your C-Reactive Protein (CRP) level is over 3.0, then this signifies inflammation and cardiovascular risk. All these can cause brain cell damage or brain atrophy (Figure 4). Anyone who has aneurysm, brain stenosis, or stroke is at high risk for brain atrophy and Alzheimer’s. In Figure 4B, the hollow areas indicate atrophy caused by ischemia. 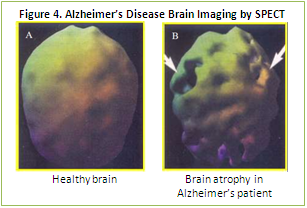 Short-term memory loss in AD patients is linked to low levels of acetylcholine. While improving acetylcholine can help with memory, it is not enough. We need to prevent circulation or cardiovascular issues that trigger brain atrophy. Improving blood flow, oxygen, and cardiovascular function as well as reducing inflammation are some of the ways of reducing AD risk.
Understanding this information provided from your body can assist you in understanding your next steps in your health journey. This can lead you to looking at further testing, working with a qualified natural health practitioner to address these challenges and most importantly, turn this around while you are still maintaining a level of health to work through this with ease. As example, wouldn’t you rather know that you have a risk factor for stroke and address this in a preventive fashion, or wait until you have a stroke and make the low percentage transition into a full recovery? If you are a following Depke Wellness, I already know your answer, you recognize prevention as the key.