The title tells you exactly what my day was like yesterday…yikes! 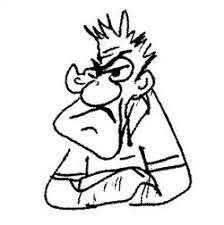 Those that are clients of DepkeWellness would find it hard to believe that I could be cranky. Now while most would not have recognized this, I felt like I was living yesterday with a little demon inside of me. Not only was that little demon wreaking havoc over my mood, emotions and non-physical energy, I would have sworn it was living in my stomach due to the extra girth I put on over night. Even using all my tools to address my emotional state, I could not get out of it.

So how many times has this happened to you?

I am sure more than once.

So what the heck was this?

Thankfully I figured this out and you may or may not be surprised.

I purchased some food out on the evening before and ordered a chili. While the chili was actually very tasty, this was the fuel for cranky and bloated. I really put all the responsibility on myself because I am usually very good at confirming what is in my food, especially when I eat out. Well, it turns out that gluten was in my chili. It was likely used as a thickening agent, but little did they know that it was actually a cranky and bloated agent instead.

Thankfully I was able to take a powerful natural anti-inflammatory, anti-oxidant and some liquid emulsified vitamin D in a high dose and I woke up this morning myself again. Yay!!!

For those that do not know this, I am a definite proponent of living a gluten free lifestyle, if gluten is an issue for you. Just and FYI, this is most of you reading this article. I have been gluten free for some time and every once in a while some mistakenly finds its way into my diet and obviously I can recognize this exposure. Interesting enough, my body did not want to hold onto the gluten and I vomited this up later in my evening. Sadly, the damage was already done. This led to some immediate inflammation in my gut and due to the direct link between the gut and the brain, this lead to the little cranky demon mentioned above. Thankfully I was able to recognize my state and simply keep my mouth shut whenever I could. I did not want the little cranky demon escape to create any damage to those around me.

I wanted to bring this up because so many people have this type of an issue with gluten and they never connect the dots. Gluten is not only a gut issue, this can be a brain issue (mood) as well as an inflammatory, immune and adrenal issue.

Scary right? Well, it should be!

I have a client that went off gluten for more than 30 days. Lost a bunch of weight (20 lbs.), lived into more energy and enjoyed and improved mood. Now this client is back on gluten, only occasionally, but his significant other has noticed that moodiness and cranky has should up big time. Now is my client thinking that gluten is the issue? Of course not. Likely the mood is being blamed on others or the moodiness or crankiness is not even recognized. That is until I was able to be a part of this communication.

So how many of you are eating gluten and feel regular states of anxiety, crankiness or depression?

And out of those the regularly struggle with this, do you even think gluten is a possible factor in your mood?

Recognize some simple stats. There are approximately 330 million Americans. Out of this,

approximately 90 million are undiagnosed gluten intolerant. Now that does not count those that are either living with Celiac disease or those that already know gluten is an issue for themselves, myself included in that group. Approximately 30% of the US population have the genetic marker to makes them predisposed to Celiac and there’s more. There are many that do not have the genetic marker, such as myself, but are completely intolerant to “Americanized” wheat. This is the hybridized and hydrolyzed wheat that we get in the US and Canada. Somebody like myself can go to Italy and eat all the bread and pasta we want but watch out when you get home. Our “Americanized” wheat will come out and bite you in the “you know what.”

One more not to make is the fact that most people will not respond in the way I did. It is thought that approximately 86% of those challenged are actually asymptomatic when they consume gluten. This means, you are damaging your body without any knowledge of this. Or you may have symptoms that you simply do not tie into the food you eat, such as my crankiness expressed earlier.

So let this article be an eye opener for you. Click on this link and take the complimentary gluten assessment for not only yourself but for those around you. While I know you don’t want to visit your cranky, nobody else does either.

If you find that you are somewhat likely to likely gluten intolerant due to the complimentary assessment, the next step is to eliminate gluten from you diet for at least 60 days. To assist with this you can also print out another complimentary form from the link above for your gluten foods in categories. This will help separate gluten and non-gluten choices for you. Also understand that being gluten lite does not work. It does take a full elimination of gluten to get the benefits of living gluten free. This is due the fact that all you need is gluten once per month to continue the inflammation, immune disruption and adrenal dysfunction for yourself.

As someone that has been gluten free for almost 7 years, except for a few mishaps such as this, living gluten free is much easier that most would think. I will also share that the benefits are also much higher than you may think.

Once you have eliminated gluten completely for 60 days, you have two choices. Choice number one is that due to the health benefits you have received, make the choice to stay away from gluten with the confidence of knowing that this is creating a happier and healthier you. The second choice is to add gluten back in to see how you respond after being off gluten for 60 days.

There is a very specific way to add this back in though.

To add gluten back in, eat a small amount of gluten with each meal for up to 3 days. This may look like a half an English muffin with breakfast, an open face sandwich on one piece of bread for lunch and a very small bowl of pasta with dinner. During the 3 days and for 2 days after, look for a response. This could be:

If you happen to notice any of these or any other brain or gut distress over the 5 day period, gluten is an issue for you and needs to be eliminated. The reason for the 3 days on and the following 2 days off is due to the fact that it can take up to 5 days after reintroducing gluten to actually feel the symptoms. So yes, gluten you ate on Monday can affect you on Friday.

All my best to your gluten free lifestyle choices!